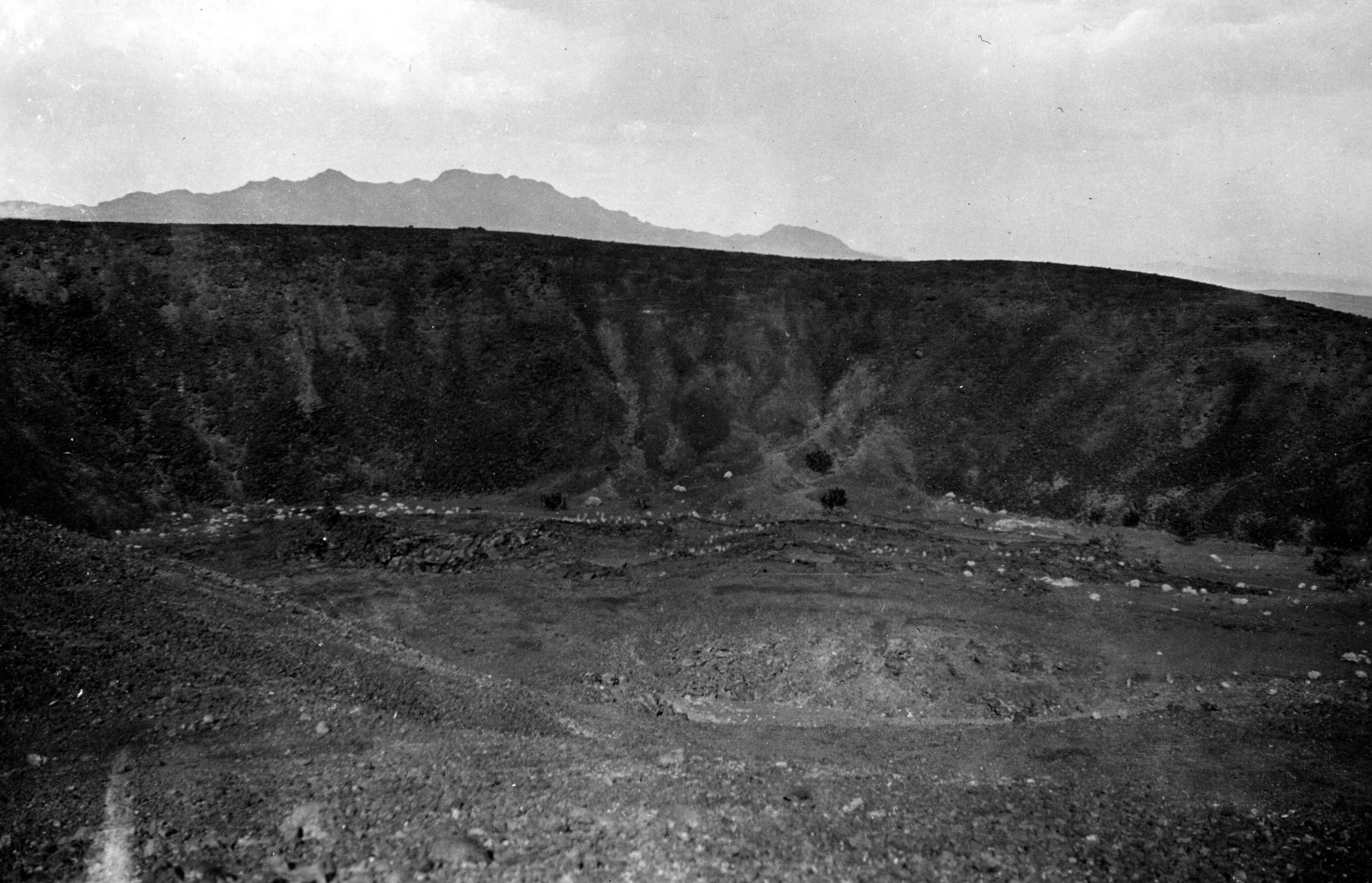 The surface forms of the Elegante Crater in Mexico and the Laghouat Crater in Algeria are uncannily similar,although the former was made through a volcanic eruption and the latter caused by a meteor impact. Thesetwo opposing forces — an ejection from the centre of the earth, and the impact collision of a foreign material– both altered the tissue of the surface, and created the same hole and crown at each respective location.

Working across a variety of mediums including sculpture, installation, photography and video, artists Miguel Fernández de Castro and Lydia Ourahmane both generally address place and landscape, usually the sites of their respective origins; Fernández de Castro’s the Sonoran Desert in Northern Mexico and Ourahmane’s the regions surrounding Oran, Algeria. Some of these sites are visible here through the video in the main gallery and the photographs in the back gallery. While geographically disparate, both of these arid sites are bound and shaped by complicated economic configurations, geopolitical turmoil, violence, and social unrest. To the artists the imprints of these conflicts can be read through the materiality of the land, their impressions present in the dirt, or the water, or the exhausted mine.

In much of their respective practices, experientially being on-site is key, and as such they are both commonly researching in the field, seeking access to difficult sites or moving a material from one location to another, and a translation of this activity is usually present within their exhibitions. In this case however, Crater, wasn’t formed by a journey the artists realised together physically, but rather through conceptual, material and emotional negotiation. This process in the end became the work itself and the trajectory is on display through a series of traces, annotated through the list of works. Like the two opposing forces, one pushing up and the other down, which formed the two craters referenced in this text’s opening paragraph, this work too results from a tumultuous collision of forces: the artists themselves and the new process of collaboration, the distance between all of the people involved, the uniqueness of Veda’s architecture and the inability for public access, material complications and difficulties with communication, and the life of the mirrored drawing completed and then removed and repositioned.

The artists originally asked what is the point in accessing spaces physically if all we have projected up on them already exists? And does the act of witnessing, or being present, only function as an affirmation? As such the gallery itself becomes an enactment of this line of inquiry, and provides a site and surface to reflect upon process, real, imagined and metaphoric journeys, expectations, experiences, and access or the mutual lack thereof.

*The exhibition is curated by Cory Scozzari. 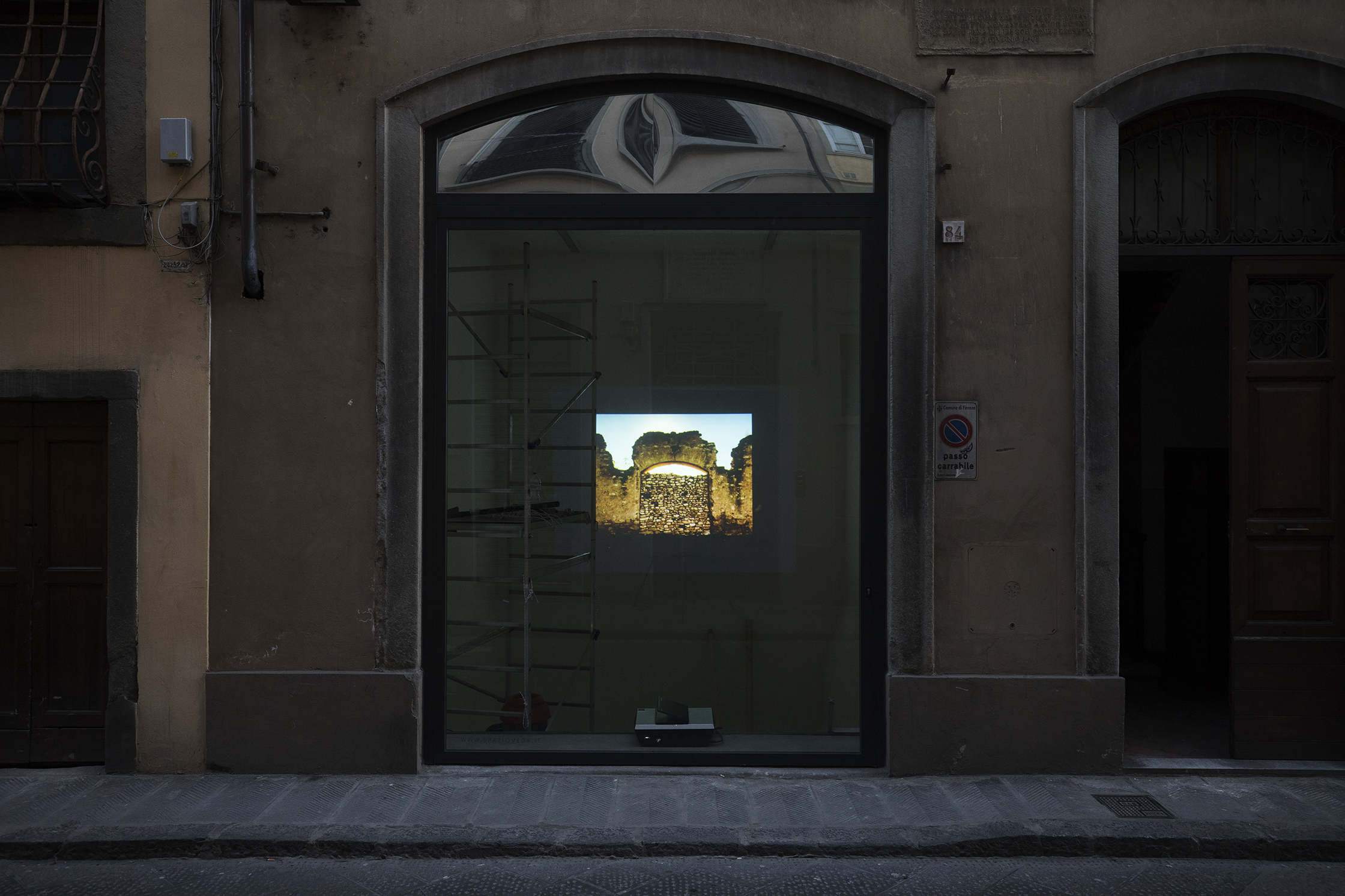 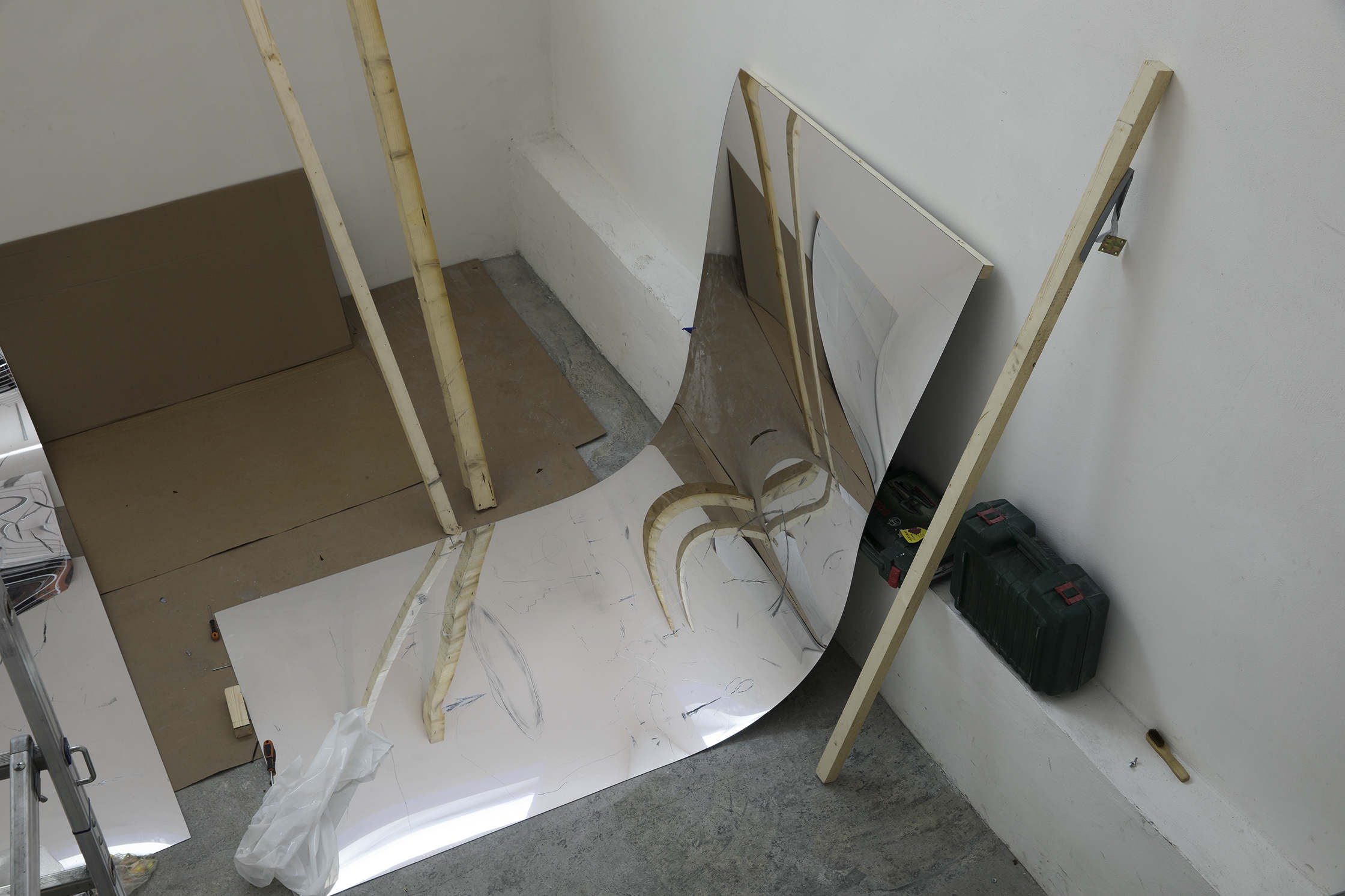 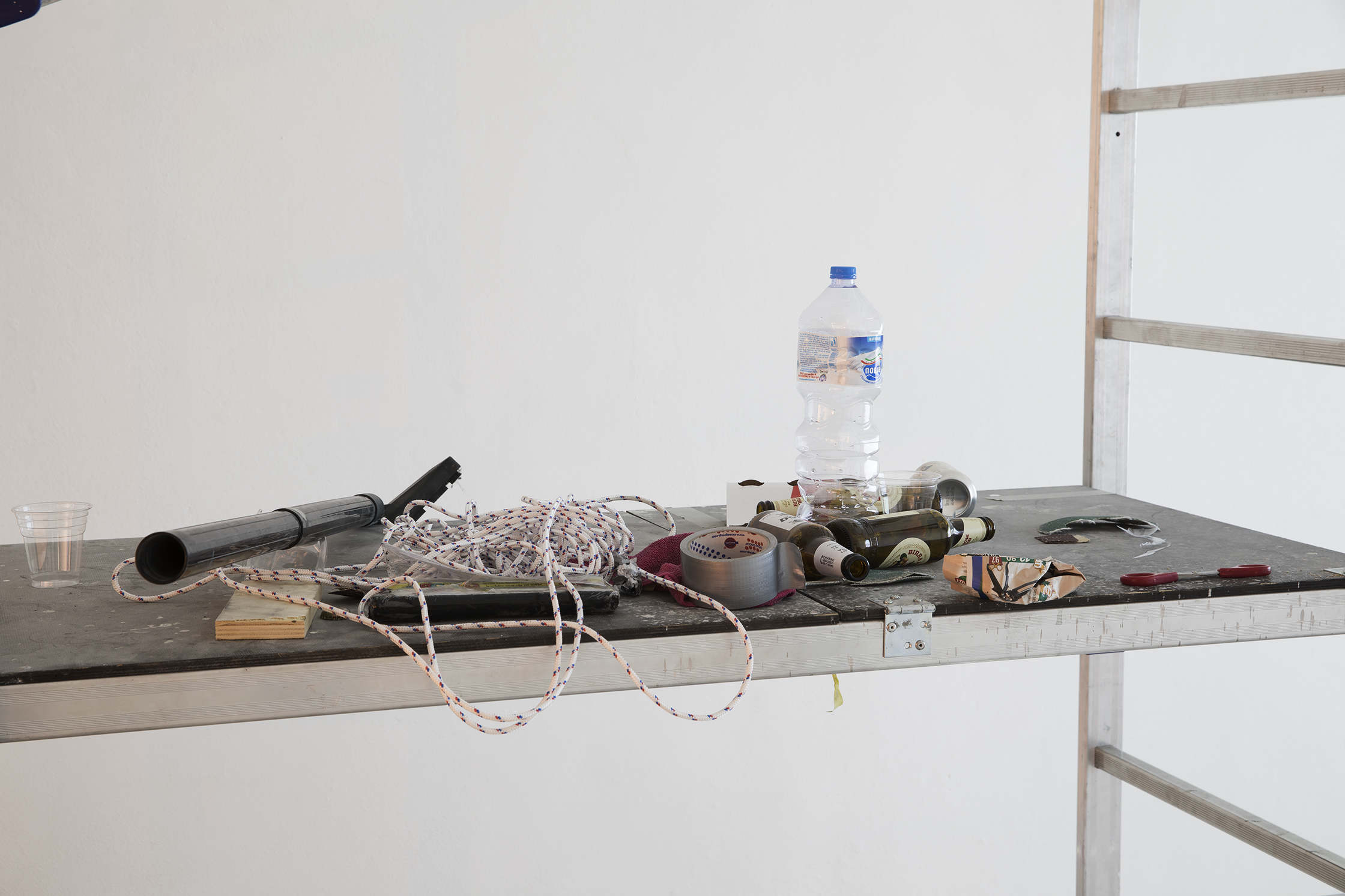 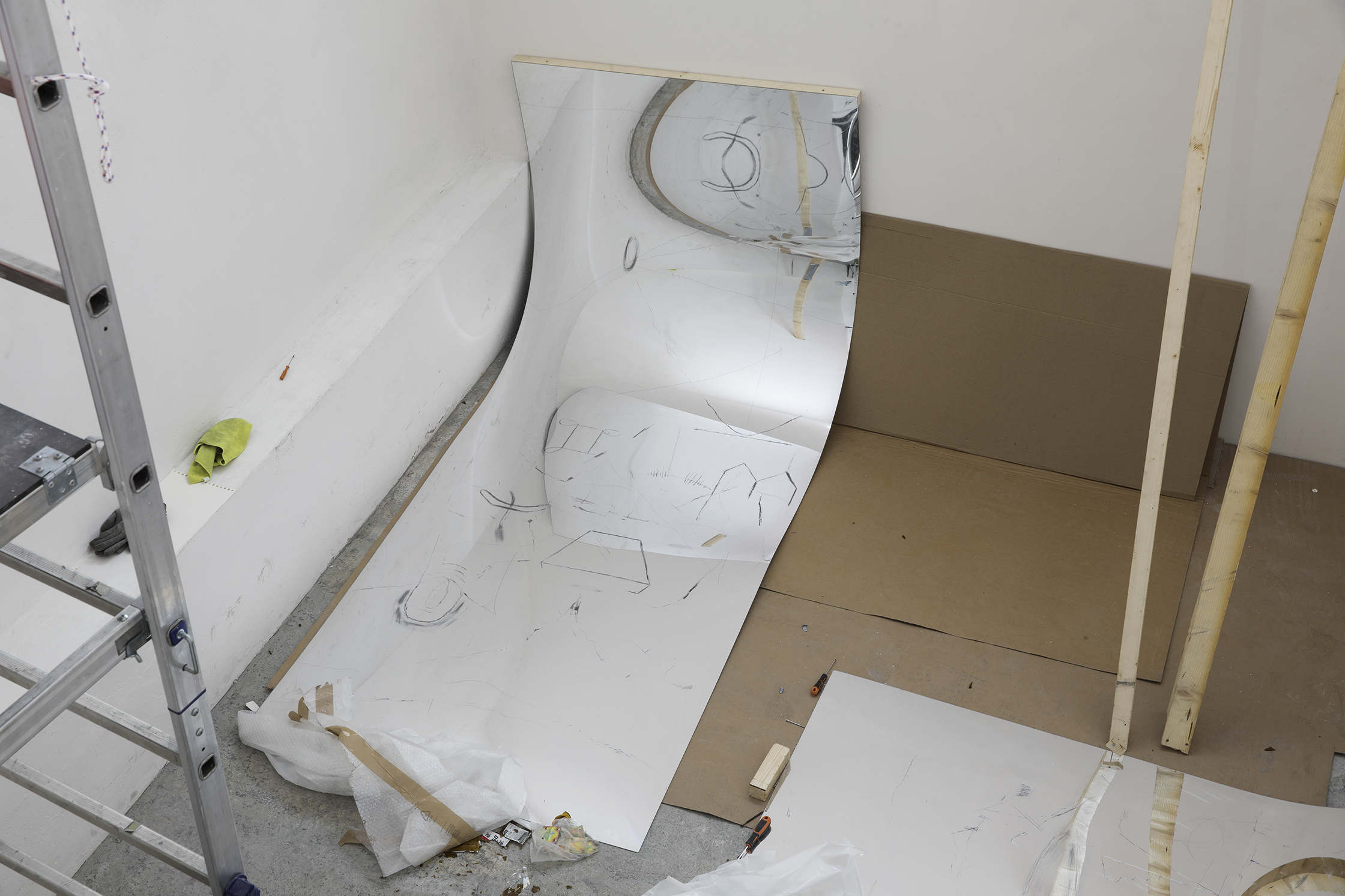 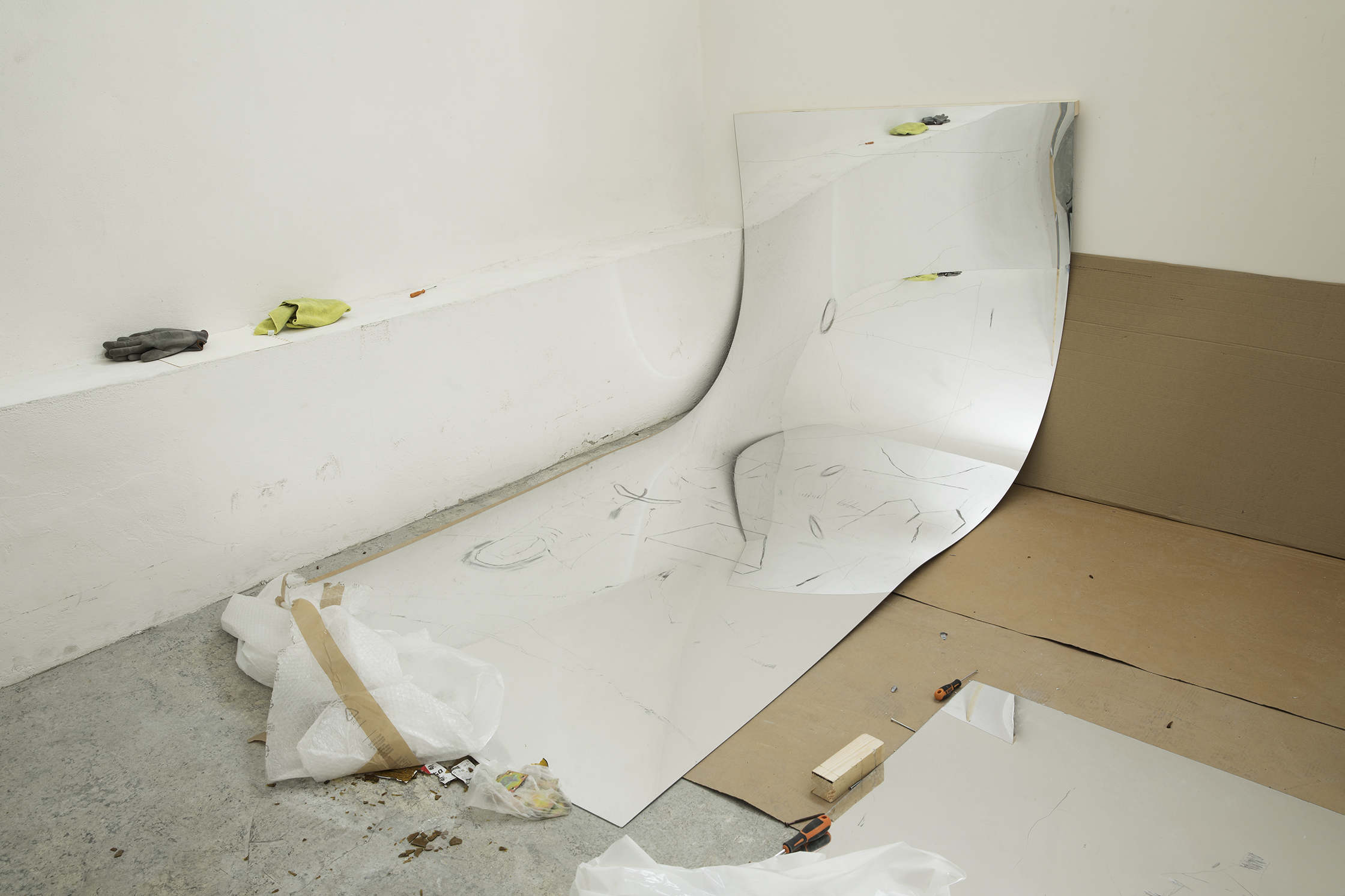 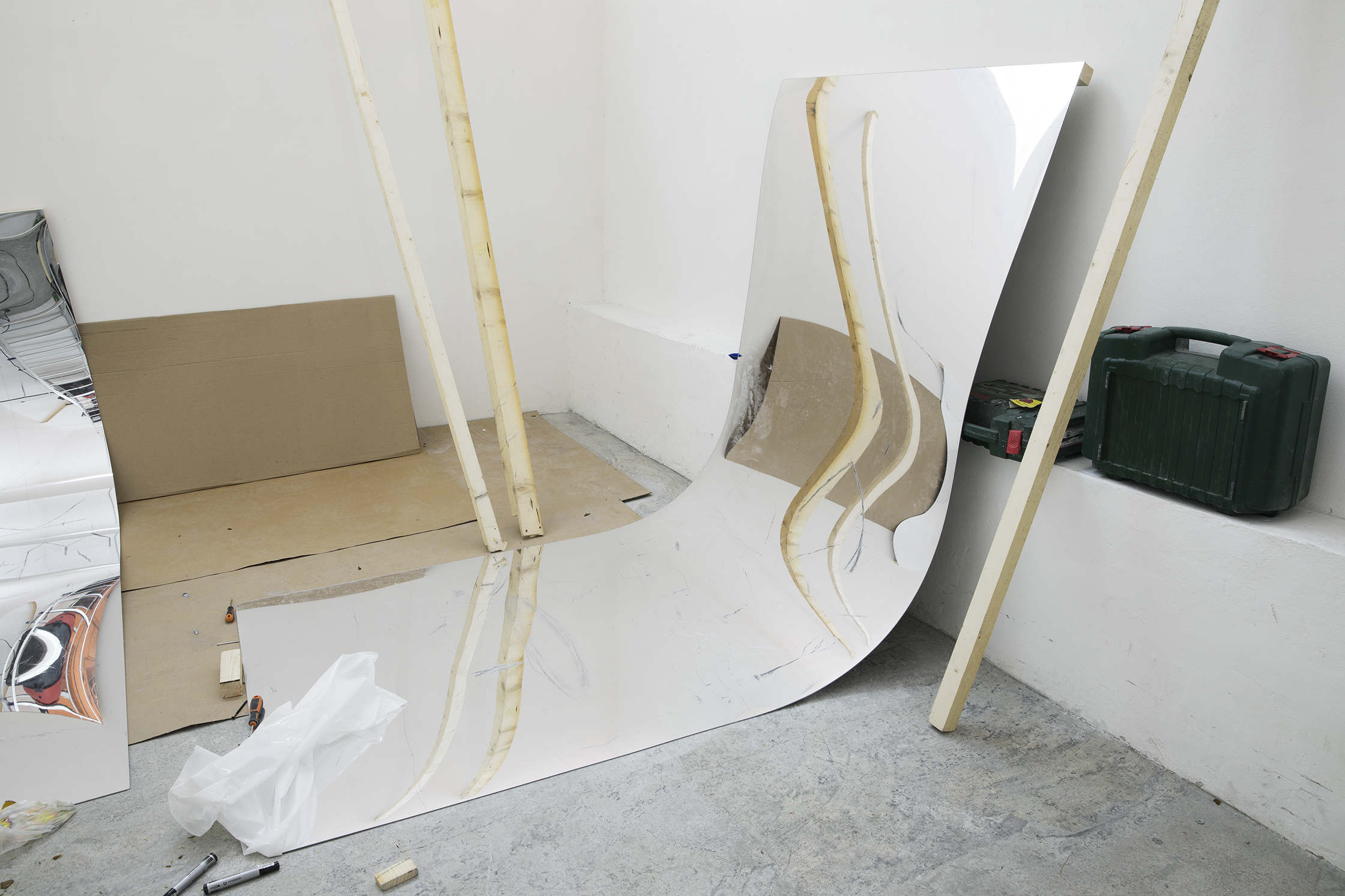 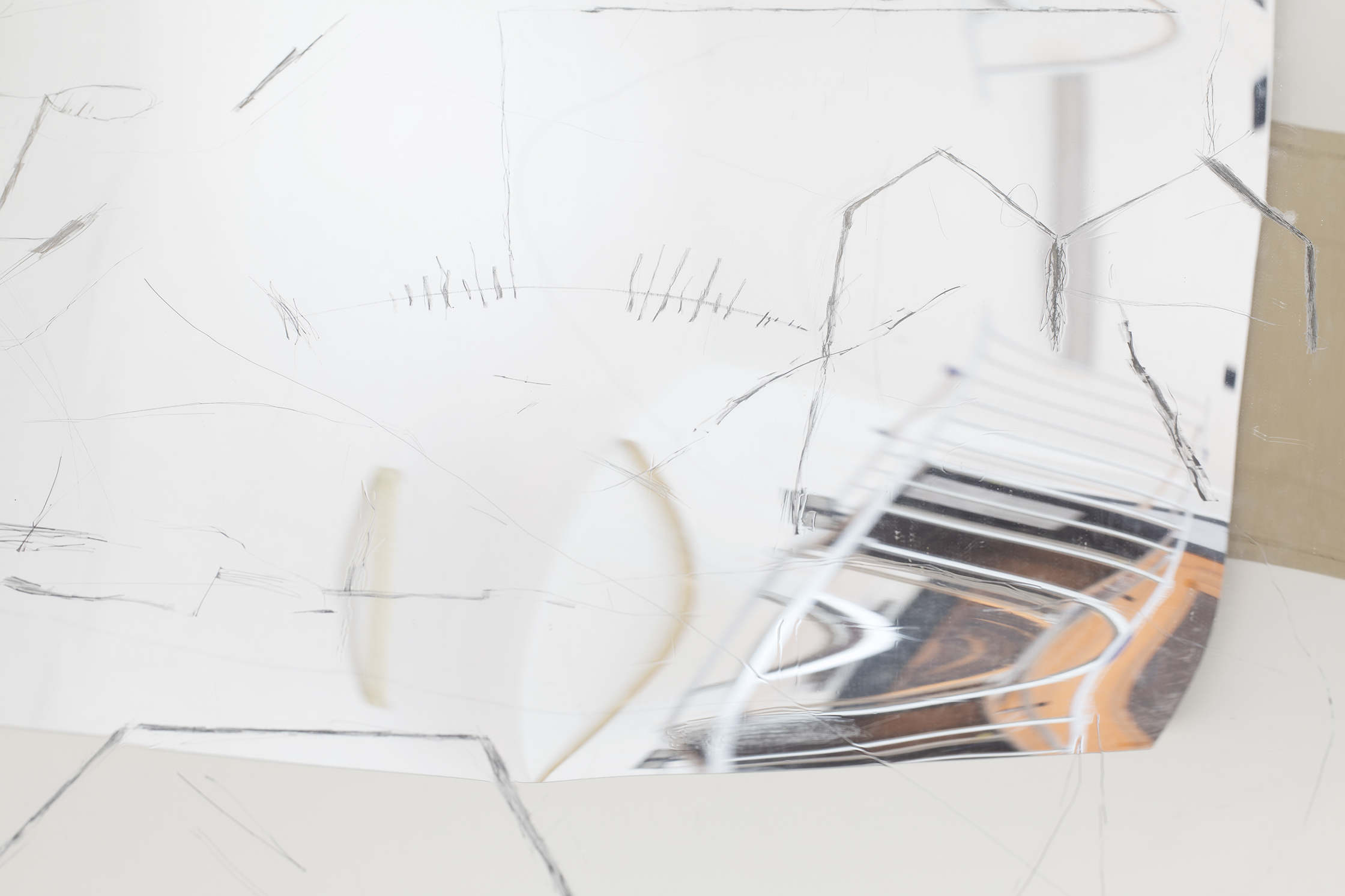 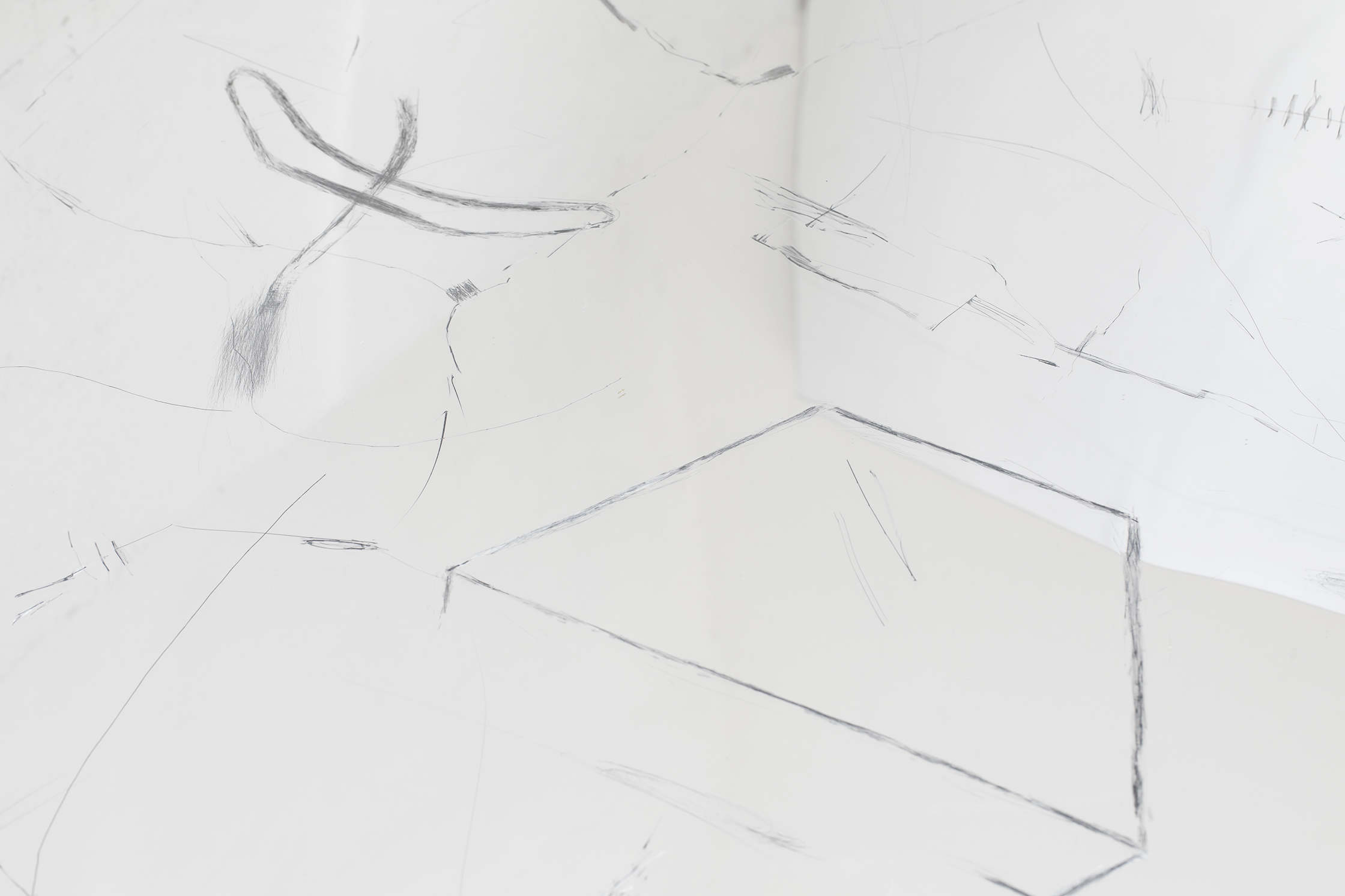 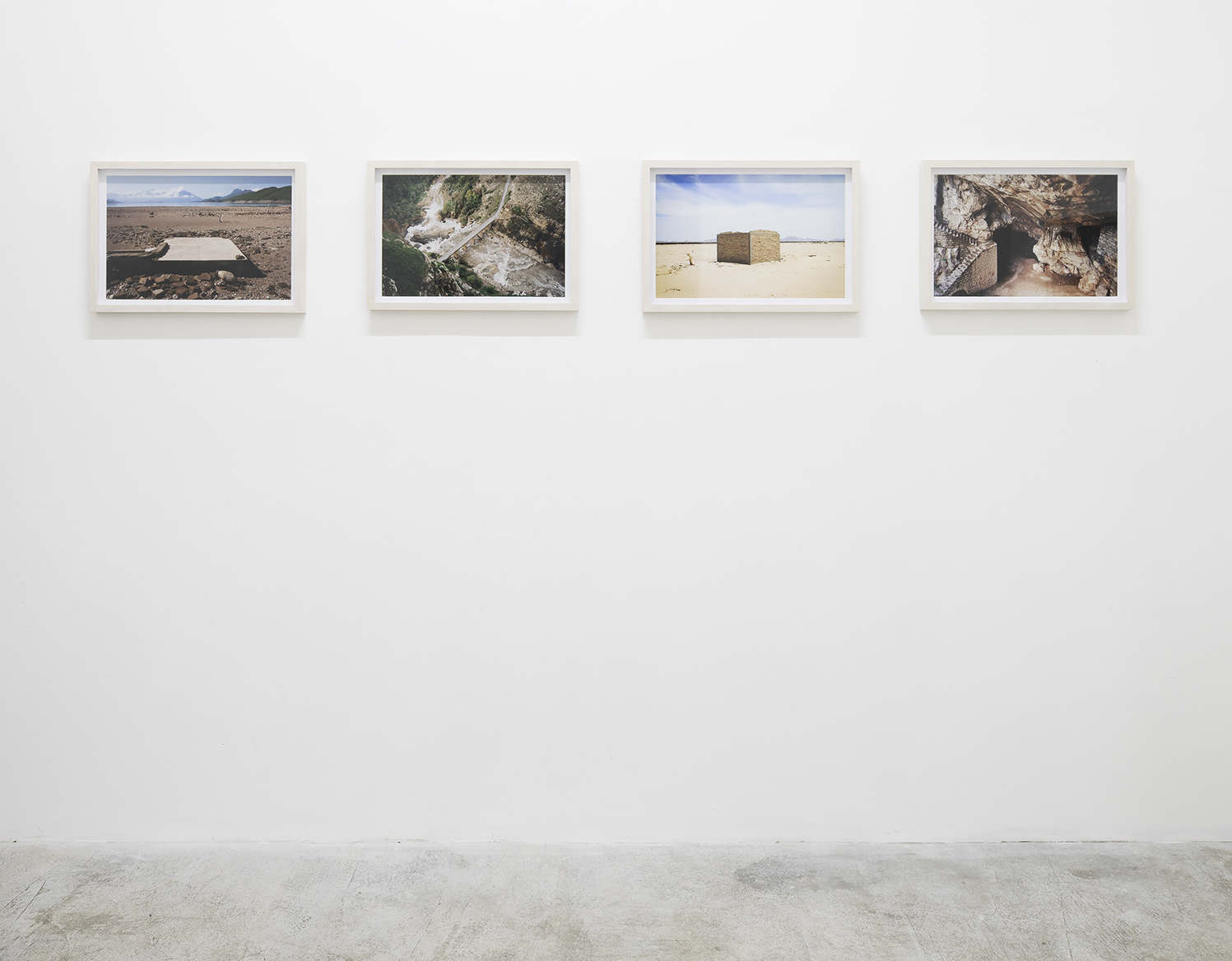 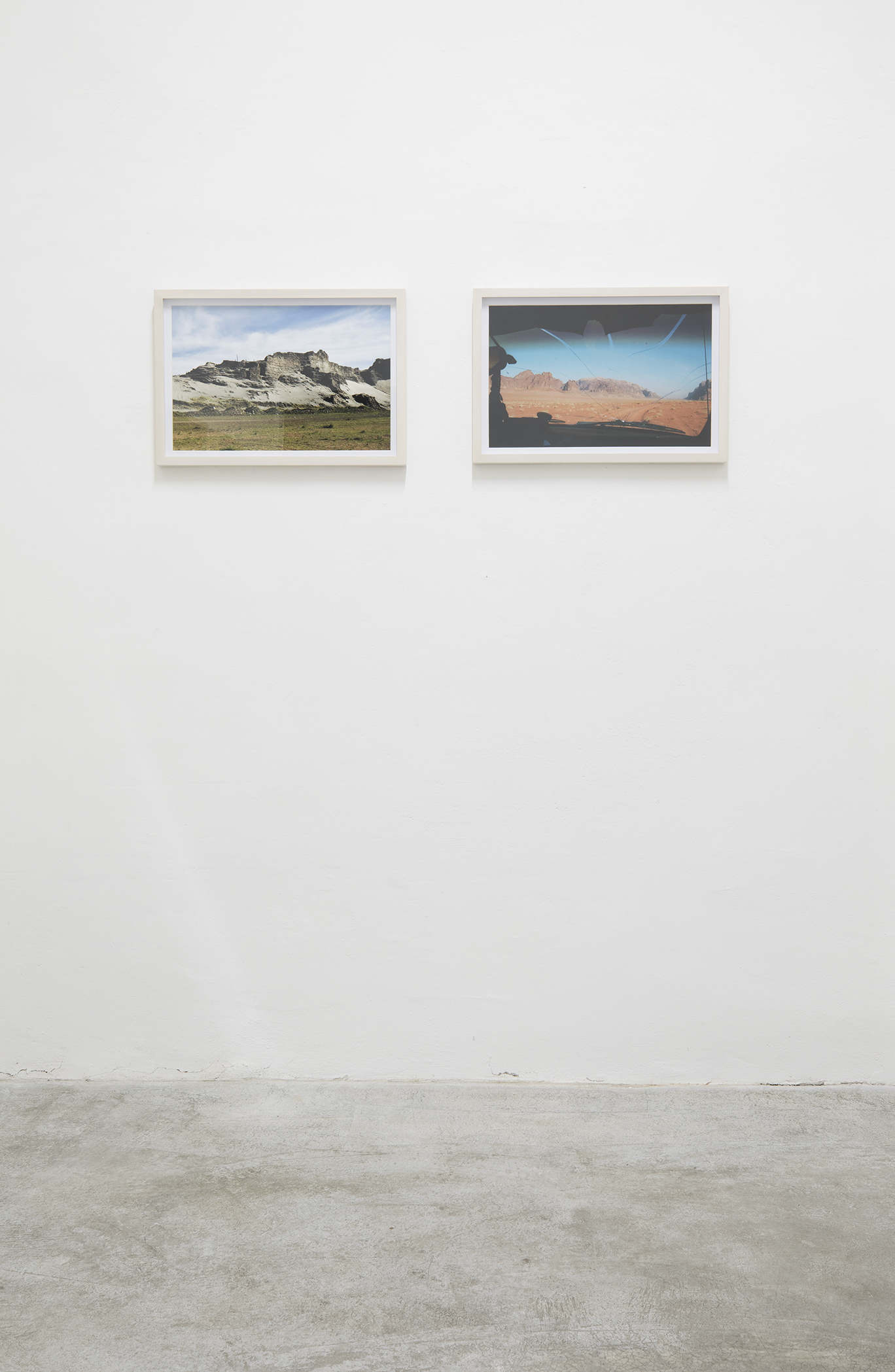